People deserve to be treated fairly and with mutual respect and compassion. Doing this for your team can yield significant rewards manifested through higher morale, increased productivity, and higher quality of work. Hanlon’s razor can help.

We often hear others around us speak about our colleagues in unflattering ways, using descriptors like “paranoid,” “lazy,” or “flaky” etc. Harsh judgements leading to demeaning labels without understanding the nature of the problem are commonplace in work. If we think about it, most of us can probably recall this as a daily occurrence taking place thanks to categorical judgments, emotional outbursts, or unjustified sharp retorts. Hanlon’s Razor  can help. A common adage or rule of thumb applying to the principle of reflection and explanation regarding events that have taken place, states: “One should not attribute to malicious intent everything that can be logically explained by elementary incompetence.”

What is Hanlon’s Razor?

Inspired by Occam’s Razor which states that the simplest explanation is most often the best, Hanlon’s Razor is also philosophical concept which alternatively states that not all events occur due to someone’s ill will or malicious intent, but rather more typically as the result of ordinary incompetence or simple mistake. It reminds us that we should not judge so quickly and so harshly as is increasingly common today. As human beings, we all deserve mutual respect and benefit of the doubt before assigning motives to actions. 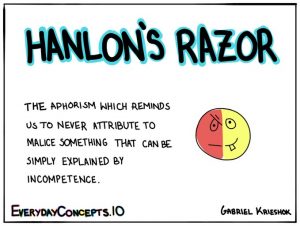 The easiest way to understand Hanlon’s Razor is to use an example:

Imagine a situation wherein, unlike your colleagues, you did not receive a notice about an upcoming meeting with the executives. Ego, ambition, and self-preservation – relics of our evolutionary pathways – invite us to make assumptions that the slight was intentional; someone, for some reason specifically set out to bar us from attendance. Hanlon’s Razor, a peacekeeping premise, invites us conversely to drop the “fight or flight” instinct, and consider the possibility that this occurrence may easily have been a simple oversight like getting an email address wrong. In short – don’t take it personally without knowing all the facts. By adjusting our attitude, we may realize that what we assumed to be malicious intent was just human error and worth forgiving.

The Origin of Hanlon’s Razor

The modern formulation of the concept is attributed to Robert J. Hanlon, who used it in 1980 in his collection of various anecdotes related to “Murphy’s Law” (i.e., “what can go wrong will go wrong”).

What to know about Hanlon’s Razor? Why is it relevant and worth knowing?

Like Occam’s Razor, it emphasizes finding the most probable cause and explanation to events that have taken place

Hanlon’s Razor, however, should not be taken as a guiding principle of direction action and absolute truth. Indeed, there are many events that do arise as through malicious intent. Hackers don’t accidentally break through a company’s firewall to steal data “by accident” for example. One of the key challenges faced in court rooms is determining motives for a potential crime. Without establishing motives, conviction is a difficult premise as defendants are innocent UNTIL proven guilty. Determining if there was profit or personal benefit is fundamental in making that judgement, and where there are clearly established motives, Hanlon’s Razor should not be applied.

Practical application of Hanlon’s principle is actually relatively straight forward in that it asks us to stop positing reasons for presumed affronts and instead to step back, and reexamine the facts, i.e. stop conjuring reasons why something bad may have happened to you. But why waste mental energy conjuring reasons we were attacked when we could lower our heart rates, increase our happiness, and improve our outlook by instead assuming the affront was accidental until the preponderance of evidence tells us otherwise? In most simple cases, mistakes are unintentional. We do ourselves and others benefit by holding off on the assumptions. Applying this principle in the workplace can help you and your firm to ensure that your work environment remains healthy, supportive, collaborative, and most importantly, productive.